Investing in China: Positioning portfolios for a new world order

Donald Trump’s slogan, “Make America Great Again”, may have helped get him elected in 2016, but it is China that is leading the world out of its current global recession. China is likely to be the only major economy in the world to post positive GDP growth in 2020 and, in the long run, it may also be China that outperforms the US.

Far from representing a setback, it’s possible that US-China tensions over trade, heightened by the Covid-19 pandemic, may end up reinforcing China’s position as a serious rival on the world stage, according to our investment manager, Willis Towers Watson (WTW). Indeed, WTW believes there is a possibility, albeit very small, that over the next ten years China might even replace the US as the global superpower, given that its population is four times larger. At the very least, it seems plausible that China will achieve equal status to the US.

In a bipolar world that is less integrated globally, with China and the US potentially enjoying separate spheres of influence, WTW believes investors need to consider increasing their exposure to the Chinese economy over the next ten years, from the current level of 5%, versus 55% for the US, to about 20%, in line with China’s expected contribution to global GDP.

China is opening up markets to foreign investors

“The opening up and reforms of Chinese capital markets are expected to continue apace over the coming decade,” says WTW. “This should allow global investors to become more knowledgeable and more comfortable when it comes to owning Chinese assets. Building exposure to China is best viewed as a journey that balances the pace of market improvements with the imperative to achieve structural geographical diversity in a global portfolio.”

WTW says there is a variety of Chinese assets that offer good potential, including equities which are attractively valued and ripe for active managers, particularly if they have local expertise and strong ESG capabilities.

“While China’s ESG practice is not yet on par with most developed nations, it has made great strides over the past decade to close the gap”, says WTW. “This positive ESG momentum should be recognised by global investors. ESG considerations should not be the reason that investors completely avoid China. Proper consideration of ESG risks and opportunities is likely to be more rewarding in China compared to developed markets, as these factors are not yet fully priced in. Given the relatively less strong ESG practice, there is a sound case for active management that exercises strong ownership practices.”

As of 17 December 2020, the Alliance Trust portfolio had just over 7% of its assets invested in Chinese companies, 2% more than the MSCI All Country World Index, largely due to holdings in Alibaba, Baidu, Tencent, Melco and JD.com, which can all be accessed via offshore listings in the US and Hong Kong. 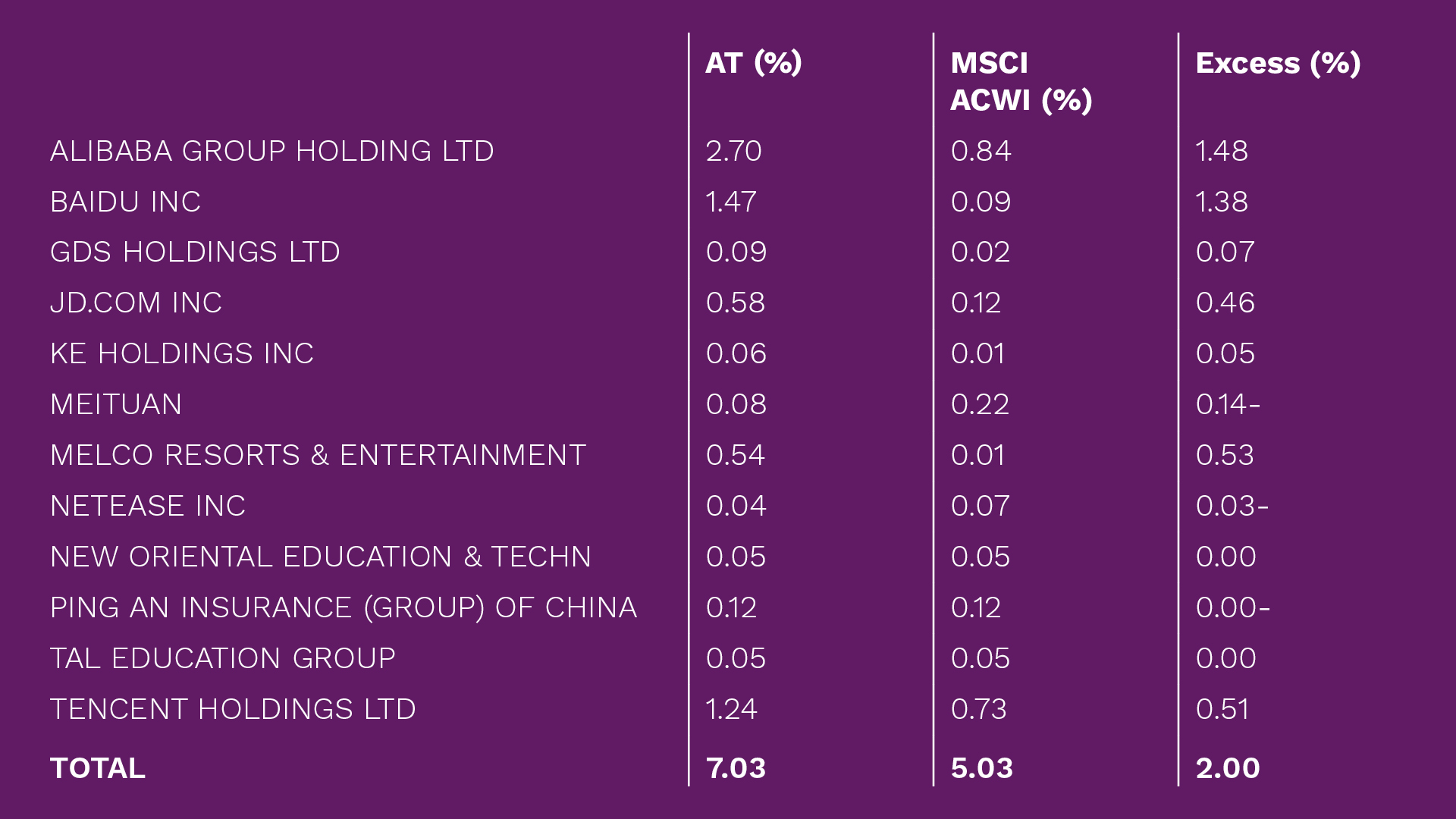 Companies listed are for information purposes only and should not be considered investment advice.

This exposure can be expected to increase over the long term, as the Company’s stock pickers are likely to find more attractive, stock-specific opportunities there over time. GQG for example, sees an opportunity for long term investors in companies catering for the highly affluent, or those tapping the emerging middle class. And River & Mercantile is particularly excited about its position in Baidu.

“While its share price has been negatively hit by a short-term downturn in its core search business, Baidu’s current valuation remains an immense bargain in our view,” says Head of UK Equities, Hugh Sergeant. “It is a very large mega-cap company, the so-called ‘Google of China’, and it has undergone a period of significant reinvestment into areas such as video, artificial intelligence and autonomous vehicles. However, it is this reinvestment that has temporarily depressed profitability which, coupled with some investors’ general fears about the Chinese economy, has meant Baidu is currently available at a very attractive valuation. We believe there is an exceptional medium-term buying opportunity here, and we have increased our position in the stock during the past year.

During 2019, China continued to demonstrate its commitment to its opening-up process, by introducing a number of incremental measures that aim to ease restrictions for foreign ownership. These include:

The quality of the investment opportunities becoming available in China is improving, in part due to better macroeconomic management that recognises the role of markets. Prior to the Covid-19 hit, WTW says China was already walking a fine line between spending enough to prop up economic growth, and cutting down high levels of debt that pose a structural threat to its economy’s sustainability. As a result, policy makers this time around are seeking more targeted investments in projects that facilitate innovation and improve weak areas, as opposed to just turning on the spending tap.

China is investment in new tech

China’s 14th Five-Year Plan (2021-2025), a pivotal tool that policy makers in Beijing use to shape the medium-term economic and social development, put achieving technological self-efficiency as one of its key developmental goals for the next five years and beyond.

The focus is now on “new infrastructure”, which China’s top economic planner defines as being “led by new development concepts, driven by technological innovation and based on information networks, to fulfil the needs of high-quality development”. It mainly includes three aspects:

Another interesting area is climate technology. China has now officially committed to achieving carbon neutrality before 2060. Given the magnitude of transformation needed, it reflects a growing confidence that technological progress can make net-zero emissions attainable, without interrupting China’s path to prosperity. For example, renewable energy, plant-based foods, circular economy, vehicle-sharing and smart buildings are all sectors that could potentially benefit from this tailwind.

WTW believes that these macro trends are expected to create many winners as well as losers in each relevant sector, which in turn creates a great environment for highly skilled stock pickers to add value to the Company’s portfolio.