Share prices rose strongly around the world in November, powered by positive news of the successful development of vaccines for Covid-19 and the market-friendly outcome of the US election. Some European stock markets posted record gains for the month, while in Japan the Nikkei index registered its biggest rise for 26 years. In America, the Dow Jones broke through the 30,000 level for the first time and the UK also joined in the rally.

Within the global stock market there was a significant rotation between sectors (See Display 1)  and styles. Large-cap growth stocks, particularly in the US tech sector, that have been the dominant drivers of returns for much of the last few years, paused for breath and in some cases retreated.  Many small-cap and cyclically-sensitive value companies, particularly lower quality names that have previously been the laggards came to the fore. 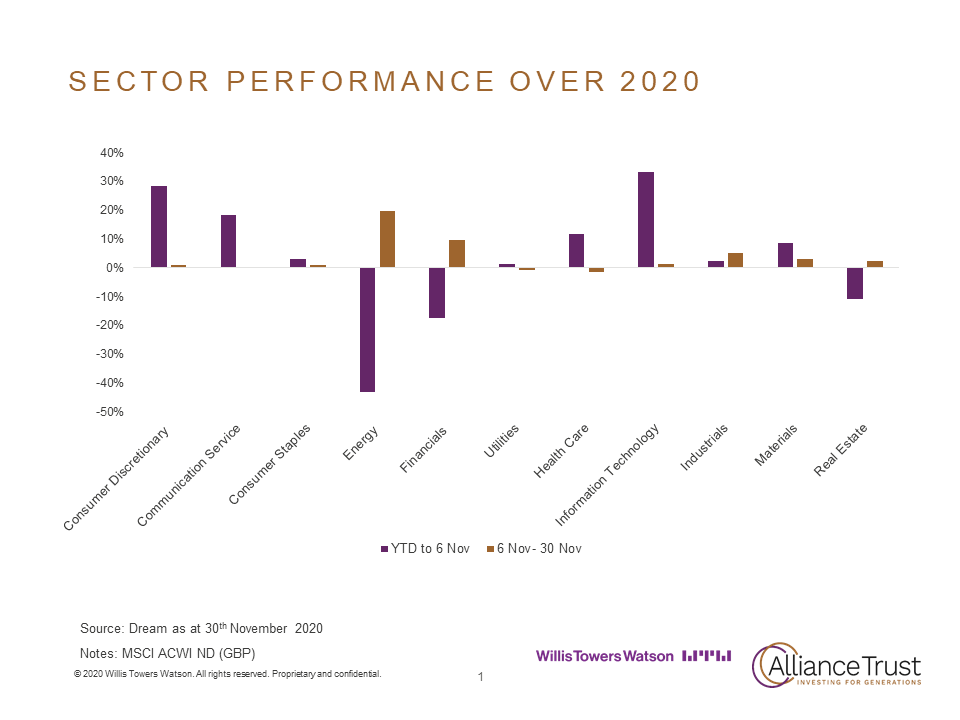 Indeed, the Company’s investment manager, Willis Towers Watson (WTW), says the expectation of a new fiscal stimulus package from Joe Biden’s administration and recent announcements of effective vaccines reduce uncertainty over the shape of recovery in the world economy. “We still expect large divergences between countries given large differences in the number of virus cases in the short-term, the size of fiscal and monetary responses, and global trade relations,” it says. Even so, it’s likely we have moved to a “higher return and higher risk regime, from a low return/low-to-medium risk regime”.

The shifting market dynamics were reflected in the Alliance Trust portfolio, with value managers such as Lyrical, Jupiter and River & Mercantile all making strong contributions to performance, while growth-style managers SGA and GQG both underperformed the market after a long period of delivering some of the most impressive returns. Overall, the NAV total return increased by 8.7%, compared to a gain of 8.8% for the MSCI All Country World Index. The share price gain of 9.3% for the month was slightly stronger than the NAV return, reflecting a narrowing of the discount.

Craig Baker, Global Chief Investment Officer of WTW and chair of the Alliance Trust Investment Committee, said: “It remains be seen whether the market rotation from growth to value is sustained. We share the optimism about a pick-up in global growth next year and it may favour a continued resurgence in the value style of investing.

“However, even though an escape route is now visible, we’re still in the middle of a global pandemic and there’s a lot that could go wrong from here. The pace of the virus progression is quite different, country by country. The ability to distribute vaccines remains unclear and the long-term side effects are unknown. We also don’t know the size and nature of any fiscal stimulus packages to come. For those reasons, we think it’s vital to have a diversified portfolio with stock selection as the key driver rather than trying to time the market.” 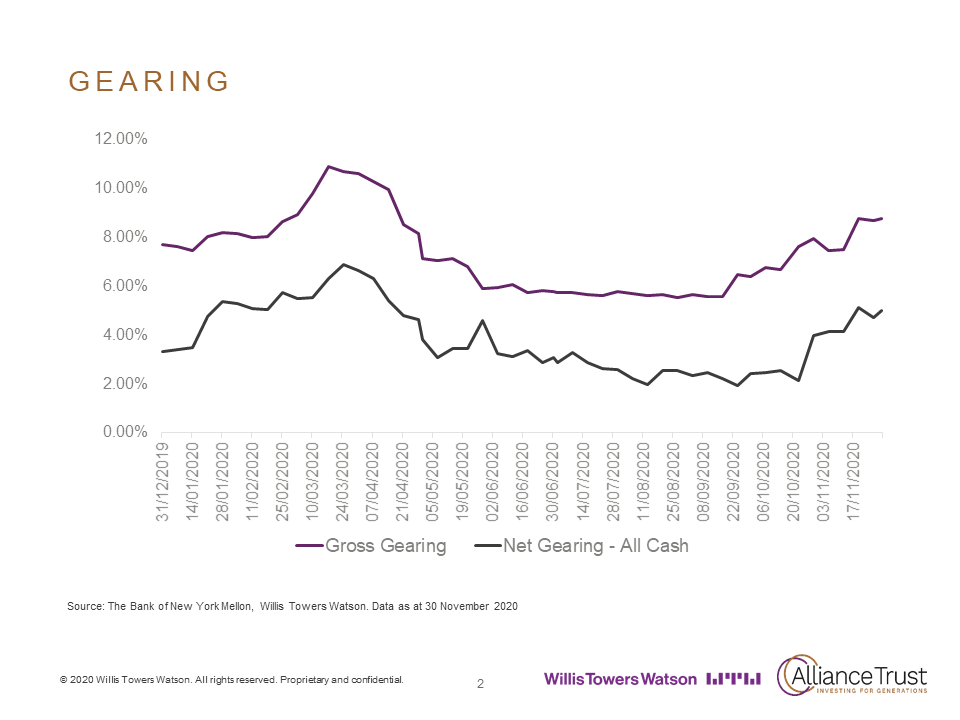 Despite the risks, WTW’s growing confidence in the economic outlook has led to it increasing the level of gearing in the trust to amplify any further market gains. Gross gearing, excluding cash held by the stockpickers, was just over 8% at the end of November compared to 5.5% at the nadir (see Display 2).

At the margin, WTW has also reallocated some capital from growth to value managers, although the portfolio remains broadly style neutral in terms of risk exposures to ensure stock selection drives returns. “Although it’s tempting to try and time turns in style cycles in the short term, we don’t believe it can be done consistently and prefer to focus on selecting the right manager to pick the right stock for the long run,” said Baker.

“The last month has been more of a cyclical, lower quality risk rally. We have a bit more exposure to  stable ‘quality’ companies that should do well despite the continued business issues we are seeing as a result of the pandemic and less in the really cyclical ideas that had a very short term bounce in November.”

At the stock level, the biggest single contributor to portfolio returns was Airbus. Its share price plunged in February when the shock of the pandemic caused widespread disruption in the airline industry. It was the single biggest detractor from portfolio returns in the first half of the year. But Veritas stuck to its position in the stock. With net cash at that time of 30 bn euros, Veritas believed that Airbus could withstand pressures on its balance sheet and prosper in the long term. The 39.4% return from the stock in November lends support to Veritas’ thesis.

Two other depressed travel-related stocks, aerospace supplier Safran and Aercap, the global leader in aircraft leasing, also did well, gaining 34% and 23% respectively, and the share prices of several bank holdings also soared.. Citibank was up 27% for the month, Standard Chartered 31%, Lloyds 27% and Barclays 26%.

By contrast, the biggest detractors from returns in November were some of the stocks that have added most value year to date due to their defensive qualities. For example, Barrick Gold, lost 15.7% as investor appetite for risk assets increased, and Alibaba, the Chinese e-commerce company  fell 16.6%. However,  our new stock picker, Lomas, believes Alibaba’s share prices has significant scope for appreciation from these levels given its dominant market position and multiple avenues for future growth. The CFO spoke on September 30th disclosing new profitability targets for its Cloud and logistics businesses above expectations. She highlighted the attractive valuation for Alibaba, claiming the public market valuation is supported purely by the core commerce business, with all the other ventures including Ant, Cloud and logistics, assigned near zero value.

Baker said that although some tech stock valuations were overblown, exposure to the sector remains an attractive component of a diversified global equity portfolio, as the digitalisation of many industries is far from complete.

Reflecting this belief, Sustainable Growth Advisors initiated a position in PayPal during the month. PayPal is the most widely accepted payment form for online merchants given its strong brand and consumer trust. PayPal’s two-sided platform, whereby it serves both customers and merchants, drives both user engagement and trust as well as merchant conversion rates. SGA believes PayPal has a significant growth opportunity as the company is a prime beneficiary of the secular trend towards greater e-commerce consumption and has additional monetization opportunities further enhancing growth prospects over the long-term. Similarly, BlackCreek added DBS Group to the portfolio. DBS Group is a leading banking and financial services group that is headquartered in Singapore and operations across 18 markets, primarily Singapore, Greater China and Southeast Asia.  The company is a leader in terms of using digitization across the full range of banking processes and services it offers to improve its customer experience as well as loyalty.

The announcement of vaccines becoming available to treat COVID-19 was a catalyst for River & Mercantile to further orientate its holdings towards high conviction recovery stocks that will benefit from stronger economic activity. It believes Baker Hughes is well positioned for an oil services company to benefit from carbon transition through its presence with a large installed base in industrial and liquid natural gas markets.  River & Mercantile believe Baker Hughes’ new energy strategy is the most advanced amongst its peers in positioning itself as an enabler of energy transition. It also thinks Whitbread is one of the most attractive recovery plays in the leisure sector, being amongst the highest operating leveraged hotel companies through its Premier Inn brand in the UK.

Lomas added Fomento Económico Mexicano (“FMX”), Mexico’s leading operator of convenience stores, to the portfolio. FMX’s share price was hurt more than their actual business during the pandemic and Lomas believe the stock will outperform as the Mexican economy recovers

Companies mentioned are for informational purposes only and should not be considered investment advice.

Past performance is not a reliable indicator of future returns. 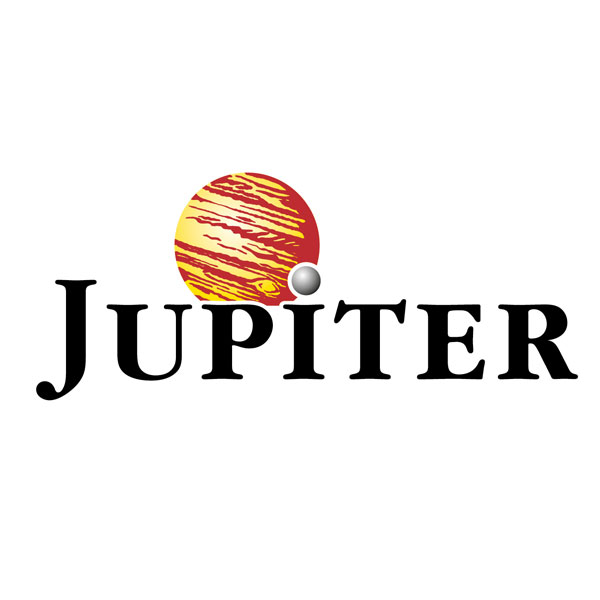 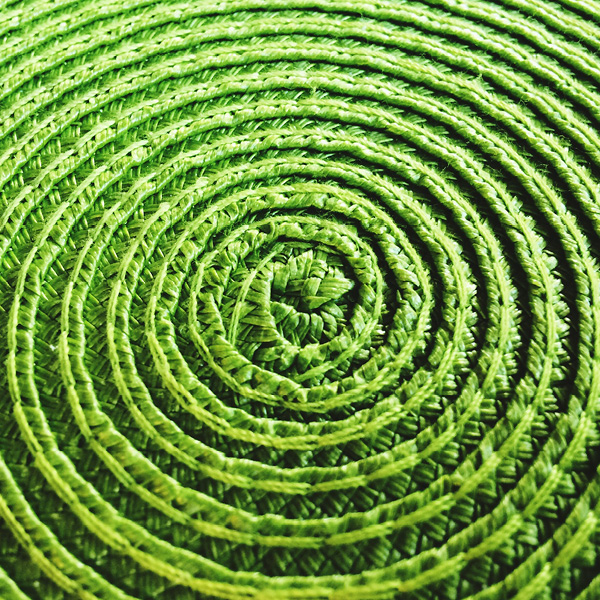 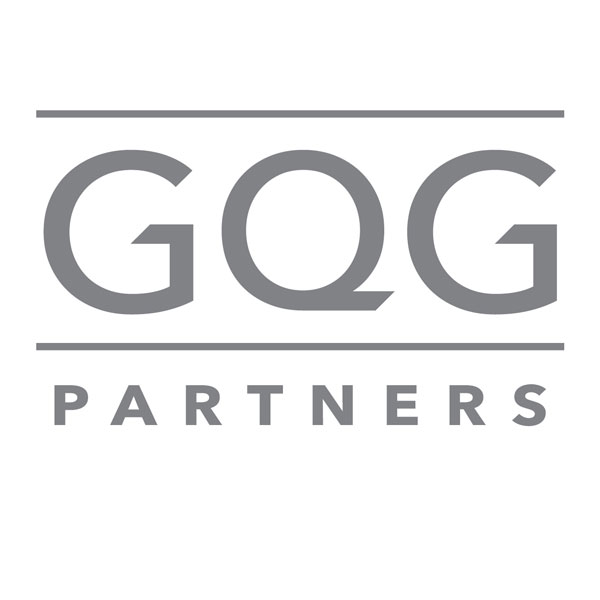 Stock Picker Views
From the Manager's Desk: Hear the latest updates from Rajiv Jain on his stock picks